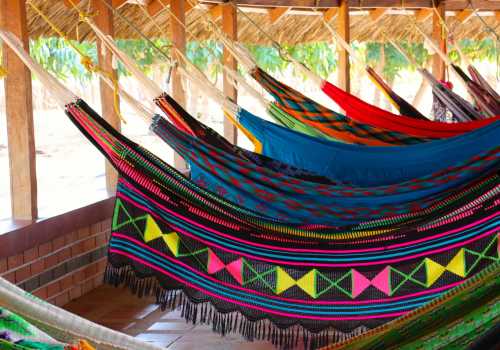 Our ancestors tell us, that one day when the birds sang for joy by announcing the first rains, A young man went out hunting in the forests of the ISASHII where dominates the loneliness and fear.

The young man was a hunter brave, like those that lead in the blood the test of its value and in the body in the footsteps of his wounds.

They say the elderly, who, when he was born, a star fell off the sky and lit up the night and the soothsayers prophesied to the newborn great surprises in his life.

That morning, the young man was in the middle of the forest where, and suddenly he heard a little voice between the forest.

At first he thought it was a simple gnashing of branches at the mercy of the wind. And continued on his way

After a while, he returned to listen to the smile between the plants, the hunter he believed that it was a bird hidden among the leaves. And without making the case resumed their march.

A mixture of fear and curiosity took over the young man, with all his courage and the sharpness of your senses moved slowly toward the place where the little voice.

Which would not be surprised? to see a girl sprawled on the floor playing with ants.

That little girl ugly and dirty, she was entertained by making small bridges by where they were going and came the restless ants. She smiled out loud when he saw the ants greet each other with every courtesy by the paths that invent.

That creature aroused so much curiosity in the young that he crept to her by between the sheets. He wanted to scare her. But the girl didnt gave signs of greater surprise.

- What are you doing here little girl?

- Can you see I´m here playing with my friends. -She responded Then, there the young made him a number of questions

-Where are you from? With whom did you come here? Who are your parents? Are you loss?

The girl ignored and continued to play with her friends.

-Always WOKOLOONAT never brings anything. While the other worked she stayed quiet This she said, referring to a little ant that was very lazy.

The young man, surprised at what he saw, he thought he was in a strange place of hexes (puloüi). More when he tried to flee, the girl said:

- Do not be afraid, Mr., that my friends will not harm you, they are very kind and as soon as the sun comes out they will go to their small houses.

-I don’t know who are you?, I can only imagine that you are creature WANULUU in human form.

And if you doubt me then take me and let me where you want. because i am a sad orphan.

A Kalaira devoured my mother, and my little sisters disappeared all, he loneliness always has

accompanied me, and nobody helps me. These, my friends joined me on the day, While in the nights, cold breath of forests fill with tears in my eyes.

The girl, crowded the penalties, and making a sign in the countenance burst to cry bitterly, while rubbing his face with the back of his hands dirty.

The young man by the amazement he had compassion, and after hearing the words of that deformed creature a kiss of tenderness stamped on his heart He had found a little flower, before the daughter of chance, now the daughter of his soul. And with tender caress of good father comforted in the act…

The young man took her by the hand, and lifted her up from the ground and brought to your home.

The young man had some sisters proud that never knew the tenderness, born perhaps to never know the happiness of mother; sterile wombs where never congealed the fruit of love, cold hands that know not the caresses.

When they saw his brother bringing in his arms a nasty creature, said:

- This is the last straw! Where will have found our brother such a monstrosity? Insurance has brought us to scare us.&quot; said another.

And began to laugh making it ridiculous to his brother to see him so requested with that creature bighead, nectarines and fetid.

When the young man came he told them:

- Sisters, I bring this girl to take care of them, and give you the care you deserve. for consideration as a younger sister, as a niece, as a daughter.

Remember our childhood helpless and without love, after having lost to our Mother, we grew up, how to grow plants that are not drown between weeds, She is so weak, a creature that can bring us joy or misfortune; but that always reminds us that our parents were able to do with our lives.

Them, hiding their evil intentions, simulated abide by the words of his brother.

The young man gave the little girl the greatest care: bathing, the combed, it gave him to drink in your totuma, slept in his chinchorro.

During leisure, the consented to all your cravings: carried in his arms, he created toys of mud the caressed and related stories of a paradise of dreams.

Never allowed a hint of sadness afflict his tender heart. The young man was like an affectionate father to the child the name of WOKOLOONAT in memory of his friend, the ant lazy. IRUNUU (Star that falls from the sky) is called the young man for having been born when a star fell from the sky.

He was the only man IRUNUU, was the breadwinner of the house, he lived with his three sisters who cared for and defended.

IRUNUU rose a day in the morning, stalled His JAPUKIITU&#39;U (Wrist), water-filled his dried calabash, took their weapons, and called his sisters.

- Sisters, today I have to be absent all day, I&#39;m going to go back far enough in the heart of the forest, to blow off a deer that yesterday I escaped, I will return in the afternoon.

-Here I leave the girl to your care; try not to cry or go hungry, and desire that you will not feel sadness or reluctance.

-We will do so. -Answered them.

IRUNUU that morning went out hunting before the dawn will spill on the mountains. In the absence of IRUNUU ensued the bitterness of WOKOLOONAT.

The wickedness of the sisters filled with pain,. That morning made her lift to cries of the Chinchorro ( hammock ). Nailed him in the face its shortcomings, its origin, its horrible condition. insulted in a thousand ways.

The chinchorro ( hammock ) of IRUNUU where he slept the girl, the sisters the tare and burned; the totuma where he drank, broke it and threw out all for the disgust that he had to the poor girl.

If she was crying; she was forced to shut up and if not silent, brandished a whip for whipping her. So the poor creature was at the mercy of those beasts worse than the beasts of the forest.

The total version of  the myth of origin of the knitting, we will give you when you come to visit and see the beautiful colors of wayuu bags in la guajira.